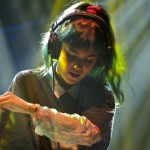 Grimes: Visions of the Past, Present and Future

The musical purpose from a band, duo or a solo-project artist is directly involve with the musical influences and the lived experiences since childhood, this can mean the past, the actual context where the artist develops their work and connects responds to the present, finally, and the most important thing, is the hability that has the artist to transmit their own and unique vision using new tools and formulas, the technology, contemporary and Avant Garde sounds, giving signs from the future and making their own path, all this added to their geniality and quality will conceive and achieve a valious and transcendental document. In terms of music, it will be an EP or LP including incredible songs or melodies and leaving a trade-mark in music history.

This is the case of the extraordinary and talented Canadian artist called Claire Boucher, from Vancouver, Canada, best known as GRIMES. She has demonstrated, because their musical formation, a clear vision of what she was looking for in her new material (maybe this is the reason why she titled “Visions” to her outstanding new LP) creating a fantastic album where the past (influences), present (musical elaboration) and future (legacy) fits so well.

THE INCREDIBLE MIXES AND THE LAYERS OF VOICES

I was shocked when I heard her latest album, not only about her particular style and awesome soprano voice, but the shapes she creates of wonderful soundscapes changing the colour and natural tone of her voice since the grave tones until the high tones, at the same time she samples, manipulates and play with her own voice using many layers, reverbs, pitch, shuffles, distorsions, sound effects, etc.

GRIMES has made a great scale of multiples voices, for example: child, teenager and adult voices, fast, robotized and alien choirs, whispers, screams, Indian, Celt, Arabian or Oriental chants and other types of music where they can be part of one only song by mixing or alternating them and also can be part of different songs.

Like some people know this technique was used by ELIZABETH FRASER (vocalist from the amazing band COCTEAU TWINS) ‘cause she made her own choirs and mixed their wide variety of voices, high and low tones, into one song !!!, and many people believed there were various vocalists in the band, what a genius !!!

GRIMES, wisely, has taken advantage of this technique adding a big number of styles and combination of voices with the new available technology, a great influence !!!

Investigating in her biography and discography I discover a nice surprise: GRIMES is a very young lady and with only 24 years has made her third release called “Visions” (2012) and is also her debut album for the legendary label 4AD records.

The innovative label 4AD is always looking for new and brilliant artists to become part of their succesfull catalogue with original and fresh ideas and sounds in the musical Indie scene, that`s why GRIMES has been chosen for the exquisite quality of her music.

She herself has manifestated feeling so proud to be part of 4AD Records for their relevant importance and being home of one of her favourite bands, the Scottish leading group COCTEAU TWINS.

Her latest album “Visions” (2012) for 4AD Records has been well-received and considerated the most elaborated of her discography and one of the best albums of 2012 so far by the critic worldwide.

Her first albums were the EP “Geidi Primes” (2010), “Halfaxa” (2010) and finally “Darkbloom” (2011) in collaboration with the Canadian artist d´EON under the Canadian label Arbutus Records.

“Visions” (2012) was recorded by GRIMES in her own room without external contact using synths, loops, voices samples, Avant Garde sound effects and it gives an extra value and merit to her work like other great artists, for example KURT RALSKE, the man behind his solo project ULTRA VIVID SCENE (1988).

A FANTASTIC SONG IS “VANESSA” THAT APPEARS ONLY IN THE “DARKBLOOM” (2011) EP.

GRIMES can be classified as one-woman project including collaborations from other musicians and bands. In “Visions” there are a huge amount and variety of styles and influences that Boucher maybe has been incorporated in her music along her evolution as an artist. They are so different one from another like Dark-Wave, Synth-Pop, Dream-Pop, Bliss-Pop, Noise, Shoegaze, Ambient, IDM, Industrial, Dance, Electronic, Avant Garde, Bubblegum, Experimental, Krautrock, Medieval and Oriental music, etc., and adding her magnificent voice, which is manipulated and sampled in a clever way, creates an original style, innovative and transparent in the whole.

I will cite an important comment of Boucher from a magazine: “The music in my childhood was really diverse because I have access to everything”, this is a consequence of the globalization and the new ways of communication that have appeared in the last years, for example: Internet, allowing her a wide range of influences. In the other hand critics points at her as the “Post-Internet girl” because she born and grew in a new digital era.

As in the vocal side GRIMES has proved her power the same thing happens in the musical side where she combines incredible atmospheric and ethereal sounds saturated of Electro-Avant Garde music, synths, Electronic music from the 80s and 90s, Neo-Classical music, instrumental fragments, musical landscapes very well-crafted and mixed, compositions full of emotion that goes straight to the heart and a sense of spirituality.

Inside one theme we can find and feel many changes and also discover little themes or small parts that putting together makes a pleasant and unique musical experience.

In conclusion GRIMES, since many individual elements at her disposal, like the single pieces of a puzzle or a toy to set up, has joined and united them in the best possible way creating a single object, this means she has made a unique and original musical universe on her own allowing to continue searching in their next records and the possibilities are endless.

THE NEW SONGS, A UNIQUE AND AWESOME EXPERIENCE

“Visions” is a mind-blowing and amazing album. Mrs. Boucher has created a masterpiece, and this is the reason why I have decided to write and share this article, the cd I bought comes in a digipack format and the art and sound are really impressive, 4AD continues taking us by surprise with their beautiful album covers since the 80`s. I highly recommend this album if you really like something fresh and new, the best way to feel this sonic artifact is to listen it several times. I hope it will grow on you, enjoy !!!

Describing the songs of the album has been a difficult process because they offer constant changes. I will define them shortly, here they are:

Infinite Love Without Fulfillment: This theme represents a good intro to the world of “Visions”, persuasive Electronic music that simulates ethnic and alien sounds, all at the same time, welcome !!!

Genesis: The best song in the album, charming from the beginning to the end, the video version is different with an excellent introduction, full of laments and medieval chants, reminds me of THIS MORTAL COIL (the leading Project from 4AD) also LISA GERRARD (from DEAD CAN DANCE), ELIZABETH FRASER (the muse from COCTEAU TWINS), HIS NAME IS ALIVE or maybe LE MYSTERE DES VOIX BULGARES (The Mysterious Bulgarian Voices) in a second phase the melodies recalls to the sounds of HARMONIA and KRAFTWERK a preamble where the song transforms in a more rhythmical tune full of uninterrupted Electronic sounds, Oriental rhytms, child-woman voices mixed with siren voices and Arabian chants, a delightful theme !!!

“GENESIS” IS THE MOST IMPORTANT SONG FROM THE ALBUM AND REPRESENTS VERY WELL THE WORLD OF “VISIONS”. A TRULY AND TRASCENDENTAL MUSICAL ODYSSEY TO BE EXPLORE MANY TIMES.

Oblivion: The first single from the album and contends very well with “Genesis”, one of my favourites, a lot of Electro-Dance-Bubblegum stuff and Synth-Pop. A friendly toy piano render pleasant the show along the entire song, we can feel the child-like voices of GRIMES and a background of voices of an adult GRIMES influenced by ELIZABETH FRASER from COCTEAU TWINS. At the end loops of Noise gives a surrealistic touch…an ear-candy and an infectious Pop song !!!

ONE OF THE BEST SONGS OF 2012 WAS “OBLIVION” ACCLAIMED BY THE CRITICS AND FANS. SYNTH-POP AND ELECTRONIC MUSIC AT A HIGH LEVEL.

Eight: The robotic voices all over the song give us memories of the German electronic band KRAFTWERK, mixed with the voice of GRIMES in a high level tone…Experimental and Retrofuturistic Pop !!!

Circumambient: What a title ! and says everything, Ambient-Electro-Avant Garde and IDM, the intro reminds me music from the incredible BRIAN ENO, scratches with very interesting sound effects at the beggining and in the next step comes the natural voice of GRIMES, less ethereal, with intelligent choirs of hundred of teenagers, fast and innovator !!!

Vowels = Space And Time: A theme more solidly structured like “Oblivion”, a glamourous poppy dance song, it brings me back to the singers of the 80`s like SANDRA (now in ENIGMA) sampled choirs with a nice touch of Rhythm & Blues in an Avant Garde context, by moments the voice is distorsioned and also GRIMES emulates the voice of LIZ FRASER, a superb song !!!

Visiting Statue: A contemplative and meditative melody, the mix of voices maybe has a similar air like HIS NAME IS ALIVE, ethnic and bizarre atmospheres, Synth-Pop-Ambient plus IDM, Scy-Fi movies effects, all in one track, so exciting !!!

Be A Body: Another lolli-pop track, a heavenly voice in the intro, Space-Rock-Ambient plus Industrial-Techno, the combination of voices is awesome. A good reference that comes to my mind will be DEPECHE MODE in the Industrial-Synth-Pop style, elegant !!!

Colour Of Moonlight (Antiochus) (featuring DOLDRUMS): In a first phase this track has a Gothic or Dark feeling adding influenced voices by COCTEAU TWINS, next, in a second phase, the song is closer to a Dream Pop-Industrial vibe. Also this theme can reflect Indian music flavored with Electro-Avant Garde and IDM, we must listen to it to feel it !!!

Symphonia IX (My Wait Is U): Electro-Ambient plus Krautrock, an spiritual and relaxing theme with hyper-elaborated voices. GRIMES doesn`t have limits, now her voice is more downtempo, seems like SINEAD O`CONNOR, ENYA, and ELIZABETH FRASER were singing together !!!. also GRIMES incorporate Indian and Arabian chants, the sounds and rhytms reminds me Avant Garde bands like NEU !, HARMONIA, LA DUSSELDORF or MOUSE ON MARS making an Experimental Pop theme, a triumph !!!

Nightmusic (featuring MAGICAL CLOUDZ): One of my favourites too, in the introduction a muse with a dark and soprano voice invite us to enjoy “La Música de Noche” (this means “Nightmusic” in Spanish) here maybe recalls the music from THIS MORTAL COIL or DEAD CAN DANCE, then starts fast Electronic music with the company of electro-drums wrapped with the choirs and voices of GRIMES and then comes Dark-Wave and Goth-Rock music remembering the great moments of CLAN OF XYMOX and THE FROZEN AUTUMN, one of the best songs of the entire album, awesome !!!

“NIGHTMUSIC” IS AN EXCELLENT SINGLE WHERE WE CAN APPRECIATE DARKNESS FULL OF BEAUTY AND HARMONY. IT´S THE REVIVAL OF THE DARK-WAVE STYLE WITH AN INCREDIBLE VIDEO.

Skin: Another outstanding song, pleasant, dreamy, spiritual and reflexive, Ambient-Dream- Pop or Bliss-Pop, penetrates your soul, in the Electronic side maybe recalls glorious moments of APHEX TWIN or CLARO INTELECTO. GRIMES sings with her sweet voice transforming it in an amazing way and in the middle appears medieval chants and a capella voices, like the style of ENYA, layers and layers of voices…incredible track !!!

Know The Way (Outro): This is a beautiful and tender ballad, piano notes mixed with the romantic voice of GRIMES plus sparkles of Noise, Shoegaze and Dream-Pop, for fans of SLOWDIVE, SWALLOW or STILL CORNERS, and excellent ending !!!

I WILL LEAVE YOU WITH A LIVE SESSION OF SOME THEMES OF GRIMES AT RADIO KEXP IN SEATTLE, USA.