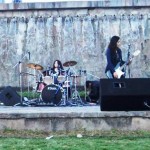 November 18th, 2014. I arrived to the rehearsal room called Zillion in order to see and ear to five girls who have joined one year ago to play punk rock under the name of Tóxicas. The first thing they confess to me is that i’m interviewing them one year exactly from their first rehearsal. There is no cake but full energy, fun, own songs and several covers that  carry me to the 80’s underground Rock in Lima.

Durmi: Each of us had an advanced trajectory in the music already, and in fact each of us had the idea of forming a band that allows us to express ourselves as women. Until the last year that we met in the Todos los Santos I fest. In that place a duh that is called Vol Tios join us and proposed us to form as an only women band. We were agree and three days later we had our first rehearsal.
Sheiro: Everyrhing was casual. Debbie and me decided to form a girls band. Debbie was teaching me to play the bass and she played the guitar. We needed a drummer and Singer.
Debbie: And as Durmi said, we met that day at Todos Santos I, they were excited and all went well.

Everybody: (laugh)
Debbie: He is the motivator
Sheiro: He  is the one that breaks the tables, windows, everything
Elizabeth: He always jump over the people at the concerts.

How did the first rehearsal result?

Debbie: We  thought that  the first rehearsal was going to result horrible, but  it was fine.
Durmi:  It resulted better tan we  thought, we did click (laugh).

What songs did you play that day?

Durmi: “La Herida Andante” belonged to Aeropajitas. Also “El Asesino de la Ilusión” that we had heard in the Ni Voz Ni Voto’s versión, “Destruir” that belongs to Narcosis y several songs belonged to the Colombian band Odio a Botero, ahhh and we got to play “La Corbata de mi Tío” from Ex, but just the half of them (laughs).

Who writes the songs and about what topics?

Debbie: We all. There are songs that each other of us brings, I mean, part of the lyrics and riffs, but the vocalist works on almost all the lyrics.
Durmi: Most of our songs are prostesting, anti-bullfighting, animalistic, against society, against people who follow as sheeps and beggars to religions.

Being a girl’s band only, have you had problems because of maleness of our society?

Sheiro: Not at all, Since we have begun oue men friends and women have supported us a lot.
Katerin: We have been criticized but just once.
Debbie: But the comentaries what ever they are we take them well, we use them to improve.
Durmi: In Cusco or where ever we have played, being an underground public or not, we have had 100% of acceptance. Being women have not had influence on a good reception. In fact, we are not neither feminists nor sexist nor something seemed. We all are agree  about searching of equals. We are equalist.

In this first year there was any concert or event that you want to emphasize?

Debbie: Personally, i think that every concert is important. We have learned of every concert  in orden to improve and being good for audience.
Elizabeth: In fact every concert have taught us to play better each instrument and the voice.
Katerine: And to take off the stage fright.

And while you learn and improve, have increased the reception of the public and the ones who organize the concerts?

Durmi: The acceptance of our band have been very good. We had the opportunity to play in San Blas and after that point people listen to us more, even we’ve been invited to Sicuani, where we played in a metal’s bar.
Katerin: Also we have had an invitation from Arequipa. In fact our plan was to go but the concert was cancelled .
Durmi: A buddy from Lima talked us since january of last year yo play in and event called Mujeres al Mando but it gets no concrete. We take every posible invitation.

You also con read all of our English Posts here.

Is there any disc or demo or what is you plan about that?

Katerin: It’s in process.
Debbie: Yes, in process. We want to improve the songs and topics because we think they can be better. We don’t want to do it incomplete.

And is there few or lots of places in Cusco to record?

Elizabeth: There is just only one studio that has good level.
Debbie: Any way just only one that we known, maybe there are more places, but the bad thing is that they are very expensive for us. So the effort we have to do to save money is harder. We could look for other easier options and record with a dirty sound but as i said we want a good recording. The important is send our message to the audience and they find it alike.

Would Toxicas define themselves as punks?

Debbie: Our base is the punk.
Katerin: But we are looking for and creating our own style.
Durmi: In fact we have freedom of choosing what ever we want without restrictions because the fact that we are based on punk.
Elizabeth: We are a mix of styles that each one of us follow.
Debbie: Since the moment that we met each other on Todos los Santos I we already had that common element.

While the rehearsal i’ve heard and enjoy several  80’s underground rock covers. Which are your music preferences?

Everyone: Odio a Botero (laughs).
Durmi: G3, Morbo, Narcosis, Aeropajitas, Leusemia, La Base and Terokalistas wich are naked and crazy people, ahhhh and Menarkía.
Katerin: Narcosis and Menarkía who are our mothers, they have adopted us as daughters.
Elizabeth: Narcosis.
Debbie: Aeropajitas, Morbo.
Sheiro: Terreviento, Manifestaxión Subversiva. We have realized that with the time the songs instead of improve have got worse about its message. That’s why we identify ourselver with the roots, with old songs wich have a strong message for us, and at that time we want to share those messages.

Tóxicas is the second all female band I have seen in Cusco, and I like them very much. They usually play at bars and concerts of Metal. People like to pogo Tóxicas covers as well as their own songs, that keep coming.

How is the independent rock scene from Cusco? Is it easy or hard to assemble a band here?

Katerin: Cusco’s scene is coming back, reviving little by little. We need to broadcast more, don’t close in ourselves.
Debbie: There are lots of new bands, young people which are in high school, but we live hard moments because there are not places for concerts, owners always think that we are going to break their stuff or spoile the place.
Durmi: In general, our idea is moving on in order to keep the scene active and in permanent moving, and doesn’t die again, finishing with the tab that punk is about breaking stuff, underground music has been stigmatized, the main problem is that we can’t get places easily. We have friends who share their own places with us and we already have done a first self-managed concert called Sumaq Punkichas. Also arrived two bands from Lima and one from Arequipa.

Debbie: Record a disc with well done songs  and other activities beyond the music to keep helping to increase the punk’s scene and learn more.
Durmi: As a band we are thinking to arrange anti-bullfighting protests too.

Finally, something you want to add?

Durmi: For me, this band has been and is something else than music. They are my friends and sisters. The music and they have filled me a lot. Growing up beside them is great!
Debbie: Thank you this interview, for your time and disposition.