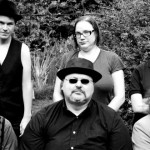 Tony Wakeford is a well-known British musician of wide experience as a soloist and member of punk, post punk and neofolk bands like Crisis, Death in June, Above The Ruins and Orchestra Noir. His current project, Sol Invictus, has produced a remarkable discography since 1987. Tony Wakeford kindly accepted to give an interview for the readers of Subte Rock.

Tony, during your musical career you have played with great bands. What can you tell us about your early days playing with Crisis? What memories do you have of that era?

Well, a mixture of very good and very bad. That was a very exciting period to be a part of a lot of drugs and a fair bit of violence. At that age you think you are immortal. A concert when both the audience and band were on some good quality speed lasted half the expected time.

What’s the reason for the changing of names, from Crisis to Death in June?

Well, they were two totally different bands. In many ways Death In June was a reaction to Crisis.

With Death In June you did some great releases. Why did you decide to pull out?

I was sacked for being an idiot. Something I have also had to do to others myself.

There were many re-editions of Death In June in which you played. Did you agree with these releases?

Well, I don’t disagree with them.

You played a brilliant album with Above The Ruin: “Song Of The Wolf”. Why did you only release only one album?

Because it comes from a very negative and fucked up period of my life. One album was one too many.

Above The Ruins – Songs Of The Wolf

You started a new phase in your career with Sol Invictus. What’s the reason for that name?

I was looking around for a name and a friend mentioned it. Bands going “rune crazy” where everywhere, so Sol Invictus seemed a bit different.

In 2011 you edited the box set “The Collected Works” a great edition made up of 37 cds and 3 dvds containing all the band’s discography. How was that madness born?

Like many mad ideas, the Germans were behind it! Thankfully this one just resulted in a Sol Invictus folly. When Martin first contacted me I thought he just wanted to release one or 2 cds but when asked which one he said all of them. To be honest when the box set was mentioned I lobbied against it. I had a fear it would not sell and, like one of those films that sink Hollywood studios, I would be responsible for throwing German Goths on to the scrap heap. The Heavens Gate of Neo-Folk. As so often, I was proved wrong and it sold out quite easily. It is something of an honour to know so many people valued what I did enough to support it.

The reissue comes with extra tracks from a 7-inch EP release and a rare compilation track.

You have worked with many talented people, would you have an anecdote to share with us?

I would have to spend 3 days in bed after recording at Matt Howdens studio due to OD-ing on tea and passive smoking.

There are many bands sounding a lot like Sol Invictus nowadays, and you are considered a referent for them. Do you feel flattered about it? How do you feel when you listen to these bands?

Yes, I suppose in that I have had enough of an effect for that to happen. But the 3 bands that are copied, C93, Death In June and us all were at least attempting to do something different. I think it is fine to use something as a reference point but a carbon copy does not really add anything.

Sol Invictus – We Are The Dead Men And Believe Me

You played at The Villa Festival II with excellent bands, how was the experience?

I love this festival, as it is put on by two good friends of mine at a lovely venue by a lake. It can be a bit chaotic and even maddening on occasion but it is all done with love and a lot of hard work from them and their friends. I am very happy to have been a small part of making it happen.

What music are you listening to nowadays? Do you have any favorite band?

I don’t really listen much to the scene I have been put in but the last albums of OTWAM and Lux Interna are excellent. I have been listening to The Cardiacs, Steven Wilson and Dagmar Krause.

In 2007 you released “The Affordable Holmes” ep and in 2009 “What If” which are, for me, two musical gems. Will you continue working with “Orchestra Noir” in the future?

Not for the foreseeable future. A lot of blood sweat and tears went into the recordings and the sales of the album were very disappointing. Also various private matters revolving around it left an unpleasant taste in the mouth.

Orchestra Noir – What If

Are you currently working on a new Sol Invictus material?

I have just finished recording the new Sol album, which is provisionally titled “Once Upon a Time” and is now being mixed and mastered in the great Satan. I have the bones of a new album which will see a change in line up and direction as I plan to use piano and a string quartet on the next album.

And finally, would you say something for the readers of Subte Rock?

Just to say a big thank you to those interested in what I do and also to apologies for my ignorance in not knowing much about the music scene in Peru. Something you should take up with Paddington Bear. He has not been much of an ambassador for you, to be honest. Thank you very much for the time you took on this interview. My pleasure hope everything is ok with you. Kind regards.

Sol Invictus – Against The Modern Love