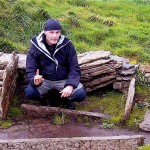 The reclusive leader of the British experimental band Six Comm, Patrick Leagas, started at the age of 16 playing drums and percussion with punk and post punk bands in 1977. His first studio recording was done in 1978/9 with The Runners From 84. He founded Death in June with Tony Wakeford  (who joined The Runners for a brief period before founding Death In June) and Douglas Pearce in 1980. Leagas left Death In June after recording the LP Nada in 1985. That same year he founded Six Comm and recorded well known themes such as Content With Blood, the Mini LP Morthogenisis and Grey Years. In 1989 he and Amodali joined Mother Destruction. He toured with this band and released 4 successful albums until 2000. In 2007, Six Comm relaunched to the delight of their fans. Patrick Leagas graciously granted this exclusive interview for his Peruvian fans.

Hi, Patrick, first of all, it is a real pleasure to be the one who interviews you for the first time for Peruvian readers. I would like to start by asking you, how did you get into music?

Hello, and thank you very much indeed for asking me. I suppose that all of us are very much influenced by early sounds, yet unknown consciously, so I cannot be sure; but musically I must have been very influenced by an older brother and two older sisters in the decade of the fabulous 1960’s in England. So, I guess that all the greats are there from the Rolling Stones to Johnny Cash and the World music LP’s, and classical music my father used to buy. I seemed to be more interested, even at a young age of 5-10 years old, and always gravitated towards the more obscure and sometime dark musical and lyrical works. I loved films for their music too. Some absolute influences from film come to mind, Scott Of The Antarctic with the mesmerizing score by Vaughn Williams, Lawrence Of Arabia and A Matter Of Life And Death… and of course, later the work of Enio Morricone. I didn’t know that such a thing as a composer existed at that age, but all these years later this music and images mean so much to me. Perhaps being brought up in a family where the father was born during the First World War meant that in some sense my up bringing was almost tainted with the late Victorian and Edwardian outlook. As a child I listened to traditional as well as pop music and classical but understood none of them. Just impressions all impressions. I briefly played drums, trumpet and bugle in a youth Military band. With regards to actually performing music, I played drums in a few punk bands during 1977 and then formed a band called The Runners From 84 with a friend. Very briefly, I must explain, that we were a two piece post punk band and we experimented with different styles from punk to electronic but more importantly we used the imagery of military, camouflage and the side drum and trumpet work which a couple of years later I brought to Death In June and which has been continued by that band.

You started your musical career with Death In June and you edited some really good albums with them. Why did you leave them?

Very simply, I had had enough of the whole idea of it after Nada and the Born Again EP 12″. I wanted to have some other kind of life experience, other than just playing in a band, studios, live shows. All quite boring to me, I’m afraid. A pretty meaningless existence from my point of view, but each to his own way. I had lost interest in the look of it, and the music, and trying to be devilish and darkly naughty. It was time to grow up and move on. I preferred the idea of having music as an occasional past time and Death In June looked like it was becoming a little too intensive in time and energy for my liking.

Do you think that Death In June imagery and lyrics could justify  the perception among some fans that the band could be fascist?

Yes, why not? I certainly understand that. If you look at it from an outsider point of view what do you see? I certainly don’t expect people to spend their time understanding the nuances of the music lyrics or the aesthetic of it. If you behave in a certain way, look in a certain way and talk in a certain way then you have to understand the consequences of it all. I couldn’t care less  about it anymore, for me it is all in the far past and I have no interest in the band after I left, or its legacy. It was merely just a couple of years of my life and I have had many far greater and more interesting experiences than just being in a little known cult band. These days, if I get either positive or negative feedback from my part in the band at that time I deal with it as it comes. I still perform some of the songs that I wrote at that time. There weren’t any politics as such that I saw in our lyrics up to 1985 and the only ones that may have concerned the subject of World War II Fascism or communism were observational pieces nothing more. You reap what you sow. I have no complaints and I understand the diversity of feeling towards the subject and that band.

Do you have any contact, or amicable relation, with former members of Death In June?

I shared the stage with Tony Wakeford a couple of years ago in London but apart from that, there isn’t any contact. While on the subject, a question that obviously arises now and then is whether the members will ever get together again, I can say from my part that, that will never happen.

How did you meet Freya Asywnn?

A common friend introduced us in 1986 and I eventually ended up moving into the co-operative house where she, her then husband and others lived. In fact I lived for a few months in the same room that was previously vacated by David Tibet. It was a small world then, and it was a small room too! The house was a meeting place for Occultists of all kinds who came to stay at weekends. There was never a dull moment during my time there and it was a very nice experience. Freya is a cool woman indeed!

Do you consider Freya Asywnn your perfect musical partner?

We are. In fact, we are not really musical partners. We spent just five days together in a studio in 1987, and we have been onstage together a total of 4 times in the last 25 years, so not really a very a great career or catalogue of work. It all happened very naturally when we worked the one album we did together. We both reflected off each others work instinctively, so I suppose you can say it was a shame that we never had the chance to work together again later, but that was the way the Runes were cast.

Why did you change the name of the band to Mother Destruction and then back again to Six Comm?

If you look at the musical subject, the music and sound, and the fact that I was not the front person, then it is obvious that Mother Destruction was not the same band. I probably created confusion by using both names. This confusion originated by our main distributors at that time. They advised me to keep the name Six Comm involved with the project  to make it easier to sell and promote. The distributors were correct, but it did cause real confusion in some respects. A group of bands compiled a sampler with covers of Six Comm: Gaderung – A Tribute to Six Comm. Do you like the covers? Were you aware of this project?

I haven’t heard any of the tracks. The label is still putting the release together. It is an online release not a physical one. I’m going to listen to them all when it is launched online. It was a very nice honour for me. To be totally honest, I really didn’t expect any bands to submit tracks, but in fact the label had too many submissions. I guess my little musical output over the years has permeated throughout the underground scene in the last decades without me being aware of it.

You are planning the Ontogeny Tour this year. Is there a possibility you may come to South America?

After decades of very rare live events and occasional releases I decided to come back to music full time last March, at a late age and stage in life perhaps, but I still have plenty of energy. Whereas in my earlier years I found being on stage a very unnatural experience, now I find that I have no such inhibitions and I usually enjoy the process. It is a privilege that anyone will pay to see my music live and I’m very grateful for that. For the coming year, I will have to find my musical feet again and decide what I am going to do. I have quite a few few concerts lined up at this time and a couple of planned releases to gradually introduce my work, both old and new, to a new audience. I prefer music of a hard electronic nature, and I am a very old fan of early metal, so I decided to  incorporate an essence of these sounds into my new work. I’ll be joined, for the first time ever, by a new member for recordings as well as live. I have, to this point, been almost totally solo with my Six Comm productions. However, I think it is still the same old me and will remain that way. Regarding coming to Peru? The chance would be a fine thing, but in reality I’m not sure that can happen. However a nice thought, I am open to ideas, and let’s see what next year and after brings.

And finally, some farewell words for the readers of Subte Rock?

If you have taken the time to read these few words then, thanks a lot folks! I have no wise things to say or lectures to give, I’ll leave that to the self deluded and politicians.

If you want to learn more about Six Comm visit their website.