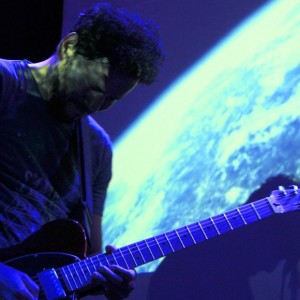 Just a few months ago I knew the music of an excellent peruvian new artist and it really surprised me because of the exquisite quality of their work and the great treatment of every song he had composed with total honesty and effort. This awesome proposal is called Astronaut Project and the creator of this solo-project is the musician and multiinstrumentalist Alberto Zegarra. He started taking singing and piano lessons at the age of 10 years old only, very young… and it was his first contact with Music, a good starting. Then he took lessons of electric guitar when he was 17 years old.

It´s very salvageable that him has much concern for the details in his compositions and incorporate many sounds and melodies that are of his entire satisfaction, it´s the process of splitting of any good idea and start to develop it and go to refine it. This is how many good musicians today make songs around the world. This new method has become a wonderful way of creating music: working alone, at his own studio and then making the mixes and get great results.

In 2004 he formed an Experimental and Industrial-Metal band called Corrosión, that goes on a parallel side to Astronaut Project until today, releasing 3 albums: “MXM” (2010), “The Rotten Creation” (2012) and the last one “Ultraje Nacional” (2015). Previously, an Experimental and Noisy demo, was released in 2006. He also was part of another band called The Wolios but only for a short period (2012-2014), but this time the sound was different influenced by the Indie-Rock and Alternative Rock styles.

All of this bands, so dissimilar in styles, contributed also to their Musical formation. After this he began recording his own songs, by himself, in his studio, creating rich soundscapes, Experimental effects and many sonic details. That´s how appeared his first single “Night”, as a demo, and then his career started to grow.

THE EVOLUTION AND A MORE MATURE CONCEPT

Alberto continued composing more songs and the result was their eponymous debut album that appeared on his bandcamp in july 2015. I can define Astronaut Project as an evolution of all their different sonic palettes of their previous bands and more focussed on the Musical elaboration and a more mature concept with tender and intimate ballads, Indie Rock songs and Electronic melodies.

The Astronaut Project title is the appropriate because it creates an original and conceptual symbolism relating to space and is a theme that Alberto is very interested to. All this is reflected in their Music, the aesthetics of the cover of the album and promotional posters. The space element is vital because he likes to invent sidereal effects and leave a stamp as the use of reverb and flanger. Now we can listen an album influenced by many styles such as Dream-Pop, Shoegaze, Space-Rock, Alternative music of the 90s, Electronica and Lo-Fi Music.

A curious anecdote is that the frontman, Alberto Zegarra, has not listened many groups of the Dream-Pop, Shoegaze or Space-Rock scene, for example, and this could be the key of the success to his Music, not only far from the physical exterior but far from Musical influences.

For concluding he told me this: “I wanna discover not simple sounds but sounds like stay always on your head…sounds that make us to return to happy and melancholic moments at the same time…”, and it´s true.

THE CONTACT WITH THE NATIONAL AND INTERNATIONAL MEDIA AND THE CONCERTS

About the media, in first place the single “Night” appeared in a compilation of the Mexican Radio Red Bull Panamérika, then the Mexican media took attention to his song and he was interviewed in the Code DF radio program of the Secretary of Culture on Mexico DF and in the Mexican website Lifeboxset. Also the single was included by the Argentinean Webzine Mute Magazine in a compilation called “The Solar Connection” (2015).

Another good notice is that “Night” was part of the Web Site Indie Rock Cafe from USA in the compilation “Best New DIY Music of 2015, Vol. V” DIY means Do It Yourself and the single appears again in the compilation called “LESNVM”, available now on Soundcloud by the radio “La Espiral Sonora de las Nuevas Voces Mexicanas” (The Sonic Spiral by the New Mexican Voices).

In our country Astronaut Project has performed many concerts and interviews to many radio stations and magazines, both physical and virtual, as for example a recent report for the important magazine Dedo Medio. In July of this year the project performed live along with many bands in the prestigious independent event Lima Indie Festival (fourth edition) with great success and once again it will be presented at the fifth edition of this popular festival in November. Recently it had a show in the local Victoria Bar in Barranco along with two excellent bands: The Spiracles and Laikamorí, presenting his debut album, and also in the Cholo Bar in Barranco.

The most important event is that Astronaut Project will make an international tour through a series of concerts and interviews in Mexico, a great pride for our country and the independent scene. The tour includes 8 dates from October this year in Mexico City, Cuernavaca, Puebla and Guadalajara presenting his debut album due to the great reception given in Latin America and in other countries around the world.

THE DEBUT ALBUM FROM ASTRONAUT PROJECT (2015) AND THE NEW SONGS

1. Little Heaven (Cielito): In contrast of many albums this record begins with a powerful tune, shiny and vibrant. We can feel guitar riffs full of colour and magic and xylophones that create a fantastic blend and influenced by the 90s style. This song reminds me of the Oceanic style of Pale Saints, Ultra Vivid Scene, the Pop side of Pixies, etc…a great introduction!!!

2. Night: Here comes the first single from this brilliant debut album. A totally change of style about the first song, now the mood is different. Is like we are contemplating a sweet landscape covered by a starry night and the title is the adecuate. The instrumentation is very well elaborated with the incorporation of a soft guitar, nice drums and Electronic Music that are at it´s best.

The lovely choirs of the frontman, Alberto Zegarra, and also female voices choirs tell us a Dreamy story. A delicious air of the incredible Swedish band The Radio Dept.

This is the official video of the single “Night” with wich Astronaut Project is made known, a brilliant theme.

3. Dance Like Aliens (Bailando Como Extraterrestres): An Electronic tune, catchy and fast, haunted by a toy synth and giving a funny feeling to the entire theme with a Swedish vibe…also is a happy tune with moments of nostalgia and 60s Surf-Rock. Influenced by the bands of the lovely Spanish label Elefant Records

4. Lejos De Aquí (Far From Here): One of the best songs of the album and the first one sung in Spanish. The voices are “floating” on and outer space with an incessant great melodie. In the middle part the song turns in a capella and more contemplative tune with many spacey sounds and detailed effects. The Space-Rock style is more appreciated in this sensitive theme treated with delicate notes… delightful!!!

The indie-rock way have a Space theme and so this great video and the song is a clear example of this.

5. Setiembre (September): A more structured and more enthusiastic Pop song with many elements of Neo-Progressive and Psychedelic roots by including pleasant guitar chords. Also there are many sorts of voices that the frontman has sampled and blending in a fabulous way… surprising!!!

This is the latest video and single released, a more joyful and funny song…great Indie-Pop.

6. Pollito Intergaláctico (Intergalactic Chicken): The most important song of the album and absolutely well-crafted by perfect Dream-Pop melodies impregned by a warm sensation. Listening this tune let us fly to a magnificent sonic journey where the Space-Rock style is more present than ever. That`s why the proposal is titled Astronaut Project. It´s like a Post-Rock song but in a low-fi key…Spacy, Dreamy, tender and warmy. Simply innovating and at the end we can reach spectacular piano notes…influenced by the extraordinary band Cocteau Twins

The most elaborate theme of the album due to the incorporation of many sonic details and a constant tender melody, simply amazing.

7. En Silencio (In Silence): An excellent choice to conclude this charming album. A dramatic and short effect acts like a little intro and then appear Synth-Pop notes seeming and space harpsichord joined by a hymn of interstellar male and female voices. A relax and hypnotic tune that take us to another dimension or to an interplanetarian voyague…a spacy and peaceful track!!!